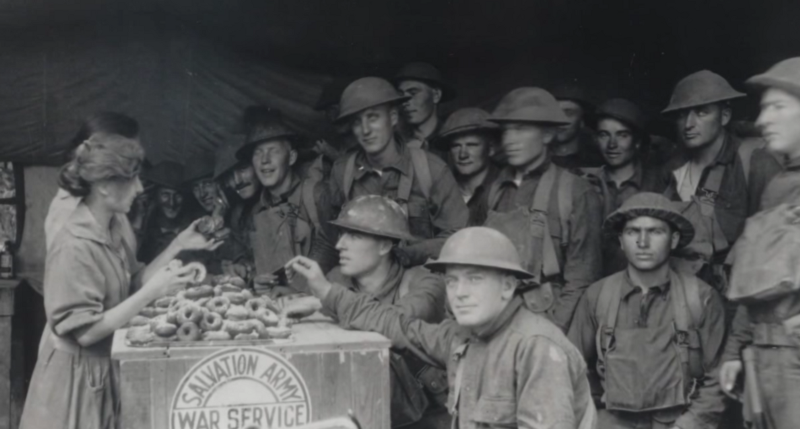 Salvation Army ensign Helen Purviance was only 28 years old when she braved the war front in order to bring our soldiers a little comfort from home in the shape of a donut. "I was literally on my knees", she recalled, "when those first donuts were fried, seven at a time in a small fry pan. There was also a prayer in my heart that somehow this home touch would do more for those who ate the donuts than satisfy a physical hunger."

It was World War I when a call to action was commissioned by Salvation Army General, Evangeline Booth who said, "It is the yearning and passionate desire of my soul that when the world is rent by hatreds, fearful of wars and revolutions that the Salvation Army should go forth." Arriving on the battlefields of France, Helen Purviance and another ensign, Margaret Sheldon, were sent to work alongside the American First Division. Their duties were carried out in a rain-soaked, dripping hut within hearing distance of gun fire. The women were issued gas masks, helmets, 45 caliber revolvers and instructed to take target practice for their own protection.

Helen braved all this during a time when women seldom even traveled on their own. It was a time in history when women were not afforded equal rights and most stayed at home taking care of their families. Helen however had an overriding desire to bring spiritual care and relief to the soldiers. She wanted to provide something that reminded them of home and started out by serving hot chocolate and fudge in between sewing on buttons.

One day some supplies arrived from the commissary of an ammunition train. Helen first thought of making pancakes but quickly ruled it out because it would require plates and butter or molasses and she had neither. She decided that donuts would be quicker and easier to make, and might remind the soldiers of home.

There was flour, sugar, baking powder, canned milk, and cinnamon but no eggs. Helen visited the French villagers who provided the missing element.

The cooking was confined to a small round stove that was 18 inches across. Dough was rolled out with a wine bottle, cut into strips, and twisted into crullers. A soldier's helmet worked in a pinch when she would run out of pots to cook with. It took all night long to come up with the first supply of 150 donuts.

Wanting to surprise the men, Purviance partitioned the hut off with a blanket so the soldiers couldn't see the special snack until it was ready. Unaware of the 150 donuts that awaited them, the soldiers lined up in mud, rain and anticipation. When they realized what the delicious aroma was, one was heard saying "Oh boy! If this is war, let it continue!"

Some of the soldiers came to Helen and asked if she could find a way to make a donut with a hole in it. She approached an elderly French blacksmith for help. The blacksmith devised a doughnut cutter by fastening the top of a condensed milk can and camphor-ice tube to a wooden block. Later she would also use large bullet casings to make the holes. Having successfully fulfilled the men's request Helen remarked, "You should have seen their faces!"

The fact that Helen had unselfishly accepted the call to bring a touch of well being to the war zone was inconceivable to some. Her service was long and hard up until the war ended in November of 1918. Later in 1976 Purviance told a newspaper, "I just knew anything could happen. There was machine gun fire and they dropped some bombs from planes. One of them fell in my backyard but somehow or other, you get an inner reserve which comes to your assistance in a time of great stress." Helen lived to tell her story until 1984 when she died at the age of 95.

Helen's desire that the donuts would satisfy more than just physical desire was realized in more ways than she could have ever imagined. The Salvation Army continued to serve donuts to soldiers through the Korean War.